Julie and I were guests of this past weekend’s Rose City Comic-Con in Portland, OR. We flew up very early Thursday morning and arrived at our hotel in the late morning. We took the streetcar to the downtown area and walked around, lunching on Korean burritos at a food truck. We Uber-ed over to The Nerd Out, a comic book themed restaurant. We both had the vegan paella, roasted cauliflower and creme brûlée for dessert.

Friday–We were already set up when the con opened at 12:30. It had been two years since my last time here, and the first time Julie was at this con. It had grown since my last time, and the convention center still has plenty of room for growth. The Artists Alley badge used my cover for UY Book 32 as its image. I shared a block with Zack Davisson, Geof Darrow and Mike Mignola.

Business was steady all day, but never overwhelming. I did a video interview for Dark Horse in the late afternoon, then was on a panel on colorists and letterers. The con ended at 8 PM and we were tired so ate at the hotel and crashed.

Sunday–I was on a panel on all-ages comics followed by a signing at Dark Horse. Geof Darrow, Mike Mignola and Tyler Crook had started an art jam on the table covering during their signings so I drew on it, too. Ron Chan signed after I did and added to it. We were driven to the airport soon after the convention ended, and were home by midnight.

It was a very good convention–well organized and well attended. 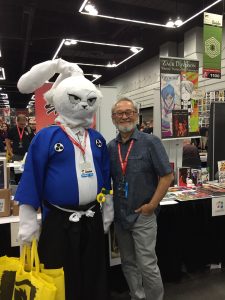 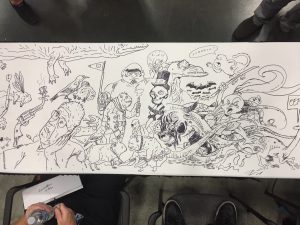 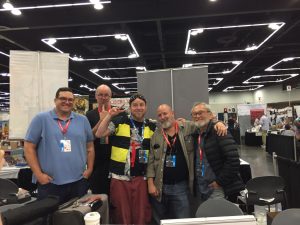