I turned in the cover art for UY Saga 8. Ink and watercolor on approximately 11×17, 4-ply, cold press Strathmore Bristol board.

This book will contain UY Books 29 (Two Hundred Jizo), 30 (Thieves & Spies), and 31 (The Hell Screen). Major featured characters are Kitsune, and Inspector Ishida. I rough-pencilled this idea with a 2H 3mm mechanical pencil, then determined the vanishing points for the building perspectives. 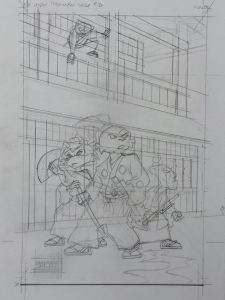 I reinforced the pencils using a B 5mm mechanical pencil, adding details to the building. This will be a night scene so I had Inspector Ishida carrying a lantern in the rough, but thought it was too distracting and eliminated it. 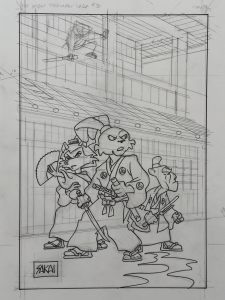 The borders were inked with a 3.5 technical pen and characters inked with a Koh-i-Noor Art Pen (now discontinued), using black Platinum Carbon Ink.

The background was inked with the same pen. If this was to be black and white art, I would have used a thinner pen nib to reinforce the perspective, but I figured I could do that with the color. 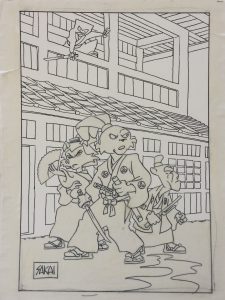 I cut out a mask to cover the borders, foreground and figures. 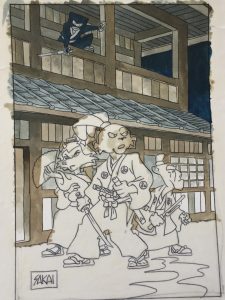 The background was watercolored with mainly browns and blues. I wanted a very limited neutral palette, using spots of brightness for effect. 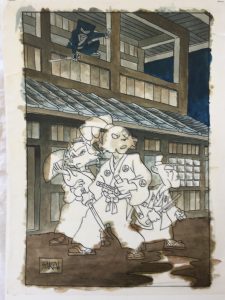 Then the foreground was colored. 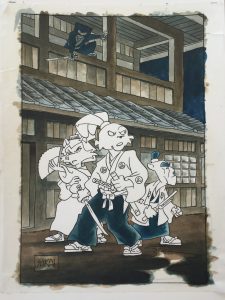 The mask covering the figures were removed. 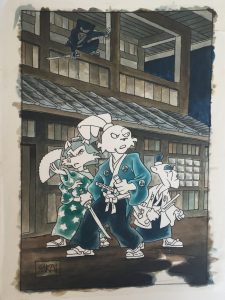 More work on the central figures. 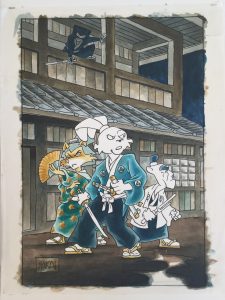 The final mask in the foreground was removed and bright scarlet was used to indicate a pool of fresh blood. 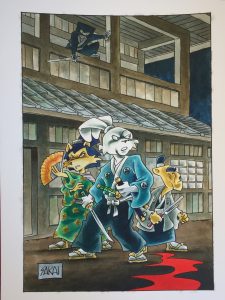 The mask protecting the borders was removed, and the cover is finished.

As with the art for all the UY Saga books, there will be a banner at the top covering 2.5 inches of the art (including Nezumi). However, the entire art will be used for the hardcovers.