As a fan you are going to want to check out usagiyojimbo.com for updates and news on all things Usagi Yojimbo related. Join the community!

Usagi first appeared in the anthology Albedo Anthropomorphics in 1984, and later in the Fantagraphics Books anthology Critters, before appearing in his own series in 1987. The Usagi Yojimbo series has been published by four different companies. The first publisher was Fantagraphics Books, the second was Mirage Publishing, and the third is Dark Horse Comics. As of June 2019, Usagi Yojimbo is now published in full color by IDW Publishing which broke Top 100 comics this June as IDW's highest sold IP that month.

“We’re all ecstatic to have Stan Sakai and Usagi join the IDW family, Usagi Yojimbo has been one of the most consistently wonderful comic-book series for decades now, a bright spot in publishing matched only by the consummate skill and professionalism its creator Stan brings to everything he does. It’s a thrill to not only be able to publish new Usagi comics but also present them all in an all-new, vibrantly colored way.” - Chris Ryall  (IDW President & Publisher/Chief Creative Officer)

was born in Kyoto, Japan, grew up in Hawaii, and currently lives in California. His creation, Usagi Yojimbo, first appeared in 1984. Usagi has been on television as a guest of the Teenage Mutant Ninja Turtles, as toys, on clothing, in comics, and in a series of trade paperback collections.

Stan is a recipient of numerous awards including: National Cartoonists Society Comic Book Division Award, six Eisner Awards, five Spanish Haxturs, an Inkpot, an American Library Association Award, a Cultural Ambassador Award from the Japanese American National Museum, and a couple of Harvey Awards including one for Best Cartoonist.

In this 35th anniversary month of Usagi Yojimbo, Stan Sakai revisits the very first Usagi story, “The Goblin of Adachigahara”, expanding it from 8 to 24 pages and adding new insights into the characters and events, as well as revealing the reason for Usagi’s pilgrimage back home.

ONLY HERE will you be able to get this Stan Sakai 35th anniversary BLANK limited cover! HURRY! These will go quick! Limited to a print run of only 1000.

As it is Usagi’s 35th anniversary this November, we’re celebrating with a special variant! Dogū is thrilled to present a beautiful FOIL & CHIBI recreation of the first ever Usagi Yojimbo comic cover!

Presented by Dogū with a limited run of 1000. Features an expanded and redrawn edition of the very first Usagi Yojimbo story! 35th anniversary special variant! 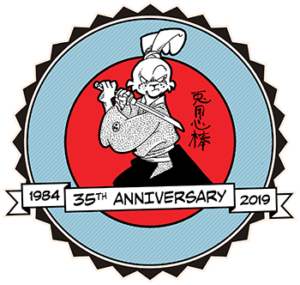 "I think Usagi Yojimbo is one of the most original, innovative, well-executed comic books anywhere to be found. Stan's style of artwork, his crisp incisive writing, and his thoroughly professional pacing, all done in a relaxed and absorbed manner, have provided comics with something so rarely seen in this field—a new literary and artistic approach to illustrated storytelling."   -Stan Lee